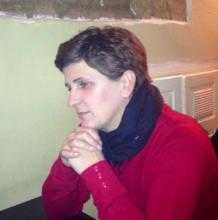 War Resisters' International - an international peace organisation founded in 1921 - is shocked and horrified by the vicious attack last week on Kosovar human rights defender Nazlie Bala. The men who lay in wait for Bala and severely beat her have not yet been identified, but presumably are those who sent her this threat: 'Please do not protect the shame. Otherwise, we’ll kill you.'

The 'shame' is in the eyes of those who object to the inclusion of 'persons raped during war' in the 2011 law 'On the status and rights of the martyrs, invalids, veterans, members of Kosova Liberation Army, civilian victims of war and their families'. During the 1998-99 war, and especially in 1999, organized rape was a weapon of war. Therefore women's groups proposed an amendment honouring rape survivors and entitling them to receive various forms of social support. This passed its first reading in the Kosovo Assembly on 14 March. Soon afterwards, Bala - who now heads the women's secretariat of the political party Vetëvendosje and had taken part in a TV debate on the amendment - received the threatening note.

What kind of perverse thinking considers it a 'shame' that Kosovo should acknowledge that there was systematic rape and sexual violence committed during the war? Yet parliamentarians opposed to the amendment used that word, and for all the evidence of mass rapes in 1999, so far very few investigations have been opened, and currently only one prosecution for rape as a war crime is being conducted.

And who can behave so shamefully towards a human rights activist whose work for the past 20 years is internationally recognised? Nazlie Bala was a volunteer with the Council for the Defence of Human Rights and Freedoms in the 1990s, frequently in touch with the WRI project the Balkan Peace Team. Her work there included documenting brutal police attacks on Kosovars, converting the violence of the perpetrators into an accusation against the Serbian regime, and affirming the human dignity of those attacked.

Without courageous Kosovars carrying out that kind of work, the world would never have woken up to the violence of rule from Serbia. The freedom struggle of Kosovo Albanians in the 1990s was a movement of virtually the whole society, with women such as Nazlie and her colleagues in other women's groups playing a central role.

Furthermore, that freedom struggle did not limit itself to ending Serbian rule, but had an agenda for a better life inside Kosovo - for an end to blood feuds, for recognition of the rights of women. When in 1997 Nazlie Bala established 'Elena' - an NGO working on women's rights - she risked being accused of dividing the social struggle. In fact, such groups and others in the Kosova Women's Network were enriching it.

Nearly 14 years after the war in Kosovo, there are still some important senses in which the war is not over - not just the outstanding political issues to be addressed, but issues of justice and emotional recovery. This is especially true for the families of the disappeared, and for those who were subjected to sexual violence. The work of memory requires recognising the suffering of war, and naming the kinds of violence that took place. The work of human rights activists is vital to that, and let nobody cry 'shame' for bringing to light the hidden crimes of war.

In about two months, the Kosovo Assembly will give a second reading to the amendment on rape survivors. The Kosovo institutions and the society as a whole needs to make plain that anyone who threatens the security of human rights defenders and supporters of this amendment are themselves bringing shame on their own community.

WHAT YOU CAN DO:

International human rights organisations, such as Amnesty International, are encouraging supporters to write letters which: