Second edition of the Handbook for Nonviolent Campaigns is launched!

The new handbook is available from the WRI webshop, here: 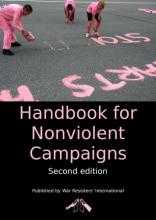 At the 'Small Actions, Big Movements' conference in South Africa, War Resisters' International released the new edition of the 'Handbook for Nonviolent Campaigns'. At a launch event, different contributors read from the handbook, described the inspiration behind creating a new edition, and explained their various contributions.

The handbook aims to show how a group can achieve their goals by developing a strategy (a plan as to how they will exert the necessary pressure to make change), before exploring what strategy looks like in reality. The handbook was written by over 30 people from countries all over the world, and aims to reflect and empower nonviolent activists internationally.

While acknowledging that people come to use nonviolence for a whole range of reasons (moral, political, strategic, even spiritual), the handbook starts with a single, concerete definition of violence;

"This handbook is specifically about nonviolence in action - what nonviolence looks like as a tool to challenge violence and oppression."

The handbook is a selection of methods, tools, and experiences of using nonviolence to create tangible, long-lasting change in situations of violence and oppression. While our movements are diverse, we all share the common goal of challenging violence and oppression in our communities. Campaigners against extractive industries in South America, community nonviolence trainers in Kenya, and activists blocking nuclear convoy routes in Germany all share as a common theme: they struggle against a form of violence, and to do this they build their movement's power and enter into nonviolent conflict.

This is why we included new content at the beginning of the handbook reflecting on the different ways violence, power and conflict can be understood. Violence is a universal ill; we all experience it, and every activists is acting against it in some form. Conflict and power are, in many ways, the roots of our work. When we campaign, we enter into conflict with our adversaries, using nonviolent methods. Our work aims to build the power we need to change the conditions that allows violence to flourish.

Power is something we act against, too; the power of elites, who have 'power over' people and situations. The handbook tries to de-construct some of this power, showing it for what it is ("people in positions of power do not have in themselves any more power than any other human being") by giving means and methods for undermining it. Using the methods used by activists from a wide range of countries, the handbook aims to illustrate, exemplify, and take inspiration from those who are already resisting violence.

The handbook also includes a variety of tools for training in nonviolence. Exercises like the 'pillars of power' help us to dissect the ways that a particular violence is upheld by social, cultural, economic or political conidtions. The 'spectrum of allies' exercise helps us to dissect the ways that different societal groups participate and support our movements (or give tacit or active support to our adversaries), allowing us a chance to grapple with the ways we might change these condtions. Other exercises help activists to move from their broad strategic aim to creating actions to achieve it.