On Monday 13th April, groups across the world took action on military spending. The Global Day of Action on Military Spending (GDAMS) is now in it's fifth year, and WRI affiliates took action to highlight the huge amounts of money that are wasted on military expenditure across the globe. 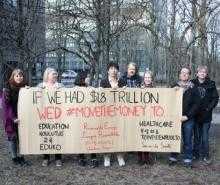 In Finland, two WRI affiliates came together to display a banner reading "If we had $1.8 trillion, we'd would #movethemoney to education, renewable energy, healthcare" in multiple languages. Members of South Korean group World Without War are currently touring Europe, met with members of AKL (the Union of Conscientious Objectors), and took part in the action.

UK affiliate Trident Ploughshares helped to organise, through the 'Scrap Trident' coalition, a mass blockade of the Faslane base from which the Trident submarines, which carry nuclear missiles, head out to sea. 34 people were arrested, and workers were sent home for the day!

Also as part of GDAMS, a delegation of Hibakusha (survivors of the atomic bombings of Hiroshima and Nagasaki) released a statement while travelling on Peace Boat, calling for for the reallocation of resources from the military "to the realisation of a world free of nuclear weapons and lasting peace."

According to the Stockholm International Peace Research Insitute (SIPRI), global military expenditure stands at $1,776 billion. This is a drop of 0.4% since 2013, but increases in spending in Asia and Oceania, the Middle East, Eastern Europe and Africa have largely matched decreases in Western and Central Europe and North America. For more information, visit, see: http://www.sipri.org/media/pressreleases/2015/milex-april-2015