Exhibitions at Small Action, Big Movements: the continuum of nonviolence

Back to main conference info

There will be an exhibition launch at 18.00 on 4th July, shortly before the Conference opening.

SMALL Actions BIG Movements: the Continuum of Nonviolence - an arpillera and other textile exhibition curated by Roberta Bacic: 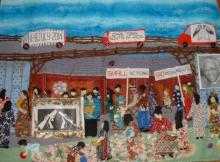 When visiting this exhibition you will experience courageous, collective and creative responses of communities worldwide to the erosion and abuse of their human rights as a central theme.  Here, women recount on cloth stories, mainly arpilleras which originated in Chile, of disappearances, forced execution, torture, resistance, denouncement, displacement, forced exile, indigenous land struggles and the gradual transition to democracy.  Grassroots women, as well as textile artists from different countries around the globe, have contributed to this 2014 exhibit which also aims at creating a piece while the conference is on.

Check a powerpoint with photos of the exhibition.

The ECC25 Virtual Exhibition: To commemorate the 25th anniversary of the launch of the End Conscription Campaign (ECC), the South African History Archive (SAHA) has developed this virtual exhibition to document how this campaign provided a united voice for young white South Africans opposed to an increasingly militant apartheid state. Details of regional programmes of ECC activities, as well as photographs, newsclippings, posters and anecdotes contributed by ECC members.

The Human Cost of India's Development, photography by Priyanka Borpujari: While India is perceived as an emerging market, the stories of the plundering of natural resources and the systematic annihilation of the indigenous peoples go unheard. In this race to make India a superpower, and a growing media industry that champions this idea, social inequality has reached its zenith, and easily gets pushed aside. Reporting on the ‘hidden civil war in India,’ Priyanka Borpujari, an independent journalist based in Mumbai, reports and photographs from the dark territories of mineral-rich India, which are rife with violence and disease, which are only silenced. 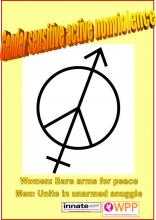 The Objectors: A photographic portrait series by Thom Pierce: Formed in 1983, the End Conscription Campaign brought together a number of men and women who campaigned tirelessly to protest against mandatory conscription - risking arrest, detainment and interrogation. The Objectors is a photographic portrait series of conscientious objectors and ECC campaigners who risked their personal liberty to fight for equality and freedom in South Africa. This series was inspired by the book ‘Under Our Skin’ by Donald McRae. 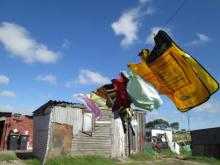 Embrace Dignity photovoice exhibition: An exhibition of photographs by eight women of the stories they wish to tell about their marginalization, their community and their dreams for the future. Photovoice is a powerful methodology that enables marginalized communities to find their voice and take action to change their circumstances.

Ghosts: Ralph Ziman is a South African film director now resident in Los Angeles, who left South Africa in 1983 as a 19 year old conscientious objector to avoid conscription into the apartheid army.  His photographic exhibition of AK-47s made of beads and wire, and entitled GHOSTS, opened at the MUTI Gallery at 3 Vredehoek, Cape Town, South Africa on 24 April and will run until the start of the conference. See more info:
http://www.themutigallery.co.za/ghosts-catalogue/