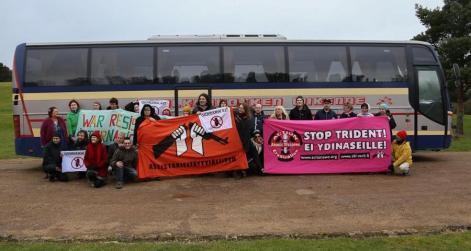 25 international peace activists from Finland, Sweden, and Belgium travelling on a coach from Finland to Burghfield in Berkshire to take part in the Burghfield Lockdown blockade planned for Monday 2 March were stopped and searched under Schedule 7 Terrorism Act by British anti-terror police in Calais on 28 February 2015. The pacifists from groups including the Union of Conscientious Objectors Finland (AKL), ofog in Sweden and Agir pour la Paix in Belgium are part of a group of more than 40 European activist who will take part in the blockade of AWE Burghfield on Monday 2 March 2015, to build up pressure against the renewal of Britain’s Trident nuclear weapon system [1].

“On arrival at the Calais Eurotunnel Terminal our coach was first searched by customs. When they found banners, pamphlets and lock-on equipment, the coach driver, a fellow activist and myself were questioned by British anti-terrorism police, who explicitly stated that this was happening under Schedule 7 of the Terrorism Act 2000, and handed us the relevant police leaflet. When we asked them why, they responded that the police suspected us of planning to take part in the action at Burghfield on Monday. Does this mean that nonviolently protesting against nuclear weapons in the UK is now considered an act of terrorism?”, asks Ruka Toivonen from the Union of Conscientious Objectors in Finland, one of the organisers of the coach.

Schedule 7 of the Terrorism Act 2000, according to the police leaflet, “is used by Police officers to determine whether a person appears to be (or has been) concerned in terrorism”, explains Andreas Speck from the Spanish contingent of Alternativa Antimilitarista.MOC. “It is the same legislation that was used to detain David Miranda, the partner of then Guardian journalist Glenn Greenwald who published the Edward Snowden revelations of widespread NSA and GCSQ data snooping, at Heathrow in August 2013. It is the same legislation that has been used twice to question me about my activism on re-entering the UK. Did any of this have anything to do with terrorism?”, he adds. According to the Network for Police Monitoring, “there is … abundant evidence that the police are using terrorism powers to stop and question activists on their political activities when they pass through UK ports.” [2]

“We are here to nonviolently protest against the renewal of UK nuclear weapons which would – if used – cause death and suffering on a scale beyond what any act of terrorism could achieve. It needs to be considered the ultimate act of terrorism. Stopping and questioning peace activists under Terrorism legislation makes you wonder whether the police have completely lost their plot. Instead of preventing the crime of the preparation for use and use of nuclear weapons, they spend their time harassing those who put their body in the line of massive nuclear destruction”, adds Hannah Brock of War Resisters’ International. “However, this intimidation will not stop us. If anything, it makes us more determined to blockade Burghfield on Monday, 2 March”, she concludes.

[1] 1. Action AWE is a grassroots campaign of nonviolent actions dedicated to halting nuclear weapons production at the Atomic Weapons Establishment (AWE), which is located at Aldermaston and Burghfield in Berkshire. Please see http://www.actionawe.org. Action AWE is committed to active nonviolence. It includes people of several religions and none. The blockade of AWE Burghfield under the theme “Burghfield Lockdown” will begin at 7am on Monday, 2 March 2015. Parliament will make a decision on renewing the Trident nuclear weapons system in 2016.