International day of action For Military-Free Education and Research

As part of WRI's Countering the Militarisation of Youth work we are coordinating an international day of action For Military-Free Education and Research, which will take place on 14 June 2013.

The day will be based on the September 2012 week of action in Germany, which was supported by over one hundred groups and organisations, with actions in at least eight cities. Many of the actions during the September 2012 week involved handing out leaflets at schools and other education centres highlighting the downsides of joining the military, and the leaflets were accompanied in some cases with fake blood, a coffin, and chocolate 'medicine' to protect students against military propaganda. Read a full summary of the week at http://wri-irg.org/node/20714.

The day of action on 14 June 2013 is an opportunity for groups to familiarise themselves with the campaign, and test out action ideas, ahead of the week of action that we are planning for 2014. 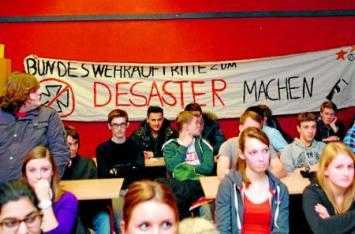 The international day of action will involve events in different countries which are all on the same theme (Military-Free Education and Research), but individual groups have autonomy in organising their actions.

It's not to late for your group or organisation to take part! Just email owen@wri-irg.org for more information and ideas.