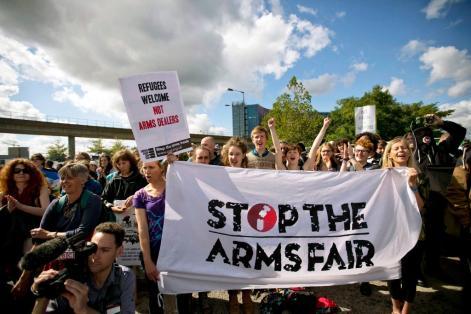 Alongside other peace activists, WRI members from around Europe are in court in London from next Monday on trial for their disruption of the DSEI arms fair in September last year.
Anyone available to join us in solidarity in the Court next week, check out Stop The Arms Fair Facebook event for info: https://www.facebook.com/events/1716179711938981/
Use #stopDSEI to share you solidarity with Javier, Bram, Luis and others in the run up to their court appearance next week.
Press release 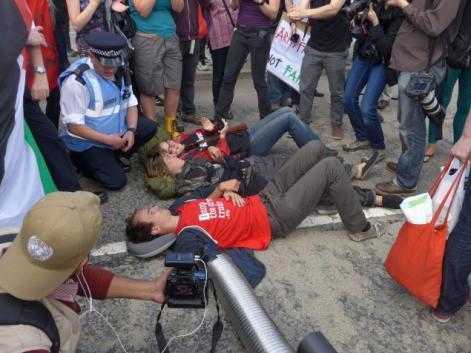 In a trial due to start next week, high profile expert witnesses Andrew Feinstein, Sayed Ahmed and Oliver Sprague will give evidence in defence of eight anti-militarist activists who are accused of disrupting one of the world’s largest arms fairs. The defendants are accused of having disrupted the setup of the arms fair by blocking the access roads to the site with their bodies, and by locking themselves to the gates.

The defendants including: Angela Ditchfield, Tom Franklin and Isa Al-Aali were arrested on 9 and 10 September 2015, accused of obstructing the entry of tanks and heavy goods vehicles by blocking the roads with their bodies. Multiple defendants are accused of having blockaded the road during the Stop The Arms Fair main day of action on 12 September 2015; of which three
are accused of blocking the East gate of the ExCel centre (where DSEI is held) by locking themselves to the gate with arm tubes and two are accused of obstructing the West gate by D-locking their necks to the gate.
The DSEI (Defence & Security Equipment International) arms fair exists so that arms buyers and sellers can come together, network and make deals, and it takes place every two years in London's Docklands. DSEI is jointly organised by Clarion Events and the UK Government. Buyers include countries involved in conflict and from human rights abusing regimes [1]. In September 2015 over 1500 exhibitors attended from around the world, including most of the world's largest arms companies, displaying arms ranging from rifles to tanks, fighter jets, battleships, missiles,
military electronics, surveillance and riot control equipment [2].

The expert witnesses have supplied written reports and will attend in person give oral evidence for the defence concerning the nature of the DSEI arms fair:
- Andrew Feinstein is the former ANC Member of Parliament who resigned in 2001 in protest at the government's refusal to allow an unfettered investigation into a £5bn arms deal that has been identified as the biggest corruption scandal in South Africa’s history. He went on to author
The Shadow World, a book described by the Washington Post as “possibly the most complete account [of the global arms trade] ever written.” He is currently Executive Director of Corruption Watch UK, an NGO which researches the global arms trade and details and exposes weapons
violations, bribery, corruption and other malfeasance.
- Oliver Sprague is Programme Director of Arms Control and Policing at Amnesty International UK. He has worked on technical aspects of UK arms export controls for over 20 years. Sprague gives regular oral and written evidence to the Parliamentary Select Committee working on arms export
controls. He has given expert evidence on breaches of export control legislation at DSEI (and other defence exhibitions) on numerous occasions.
- Sayed Ahmed is Director of Advocacy at the Bahrain Institute for Rights and Democracy (BIRD), a London based NGO which seeks to improve human rights and accountability in Bahrain.

The defendants themselves will also seek to give personal testimony of their reasons for opposing the arms fair and the catalogue of oppressive regimes that shop there. This will include a firsthand account from a Bahraini activist who was tortured during the Bahraini uprising [3]; an account from a Kurdish Solidarity activist with experience of Turkey’s brutal repression and attacks on Kurdistan [4]; and an anti-militarist activist that has previously sought to privately prosecute two arms companies for the promotion of illegal torture weapons at DSEI 2013 [5].

Defendant Tom Franklin, 57, of Clifton Without, York said:
"It is intolerable that the government is supporting the sale of illegal weapons and weapons being used to kill ordinary people from the West Bank to Yemen and Sudan. 'The only thing necessary for the triumph of evil is for good people to do nothing.' So I had to try to prevent evil".

In a joint public statement [6] the Defendants Campaign said: “We know that the tools of the type promoted for sale at DSEI will be used to reinforce apartheid, to surveil and brutalise communities from Brixton to Bahrain, and to perpetuate the border regime that kills thousands every year – as European states wage a war against the refugees they helped create. We know that weapons promoted at DSEI are used to incinerate whole families at the touch of a button in places from Palestine to Pakistan. We know that such weapons will continue to devastate landscapes and do permanent environmental damage across the globe. And that these weapons have been used in systematic forced evictions and ethnic cleansing; such
as against the people of Kurdistan. And we know that weapons of the type promoted at DSEI will be used to torture and repress people based on their political views, faith, gender, or sexuality in places like Saudi Arabia. Sometimes the tools of oppression are literal – and they are for sale at
DSEI arms fair.”

The week-long trial is listed to commence on Monday 11th April 2016 at Stratford Magistrates Court in London. The defendants will be represented in court by Kellys Solicitors of Brighton, Hodge Jones & Allen of London and Bindmans Solicitors of London.

FOR FURTHER INFORMATION
The defendants’ campaign can be reached for comment at: stopdsei2015@riseup.net

Photos of the protests are available.