Conscription for women in Norway 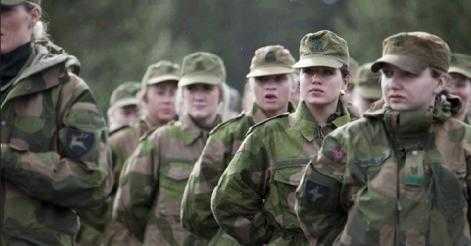 On 14th June this year the Norwegian parliament decided to introduce conscription for women. The question was on the agenda of all the political parties’ yearly meetings this spring, spearheaded by women from a young generation. The most surprising thing, bearing in mind the Norwegian context, is that the socialist party’s young women were at the very front in calling for this change. The surprise is because this party, and especially the younger generation, have in the past taken a strong antimilitaristic stand. Now, their main argument is that women should have the same rights, as well as taking the same duties, as men. What has happened? Why is conscription for women so important to introduce? What has happened with the former feminist stand that was based on values of worthiness, anti-patriarchy and non-hierarchy, and not automatic equality on the male society’s premises?

Women can in Norway join the military forces in all positions and branches. They can also be conscripted on voluntary bases. However from 2015 it will be a duty, not a choice. From 2010 young women had to register for the military. The military has a goal to reach 25 % of women before 2020 - today there are only 8-10% women. As in many other countries where women are part of the military forces, women suffer from harassment and in particular sexual harassment. Researchers find that little action is taken by the authorities. The Norwegian military is in practice professional. Very few men are conscripted - around a quarter. That means that very few women will be conscripted. From a military point of view, it will be easier to find men and women among the conscripted group with the right qualifications needed for a highly technological and professionalized military. As the minister of defense, Anne-Grethe Strøm-Erichsen, put it: “We don’t introduce conscription for men and women because we are in need of more soldiers, but because we need the best.” Military conscription as a system is deeply rooted in the Norwegian society as part of the democracy! All Norwegian men, and now also women, are equal in defending the country, it is said. If the conscription were removed, something very fundamental would break down - at least, that is the belief. A professional army is unthinkable. The fact that Norway is very close to a professional army today is not talked about. The question may be asked: how democratic is the conscription when only a forth of the men are conscripted, and there will probably be even less women, and when it comes to involving the conscripted soldier in decision-making and military strategising?

The views on conscription for women may seem to be linked to generations - the older women are against it since women still have other burdens in society, like giving birth to (and raising) children. A lot of measures have been taken to give men the opportunity to look after children, yet there are still more women who do that. The younger generation thinks that it is high time that women should enter men's domains, like the military. Another argument is that the military represents an area of education and work. Conscription is a route to getting jobs. It is said that it is not fair that women are not getting the same access as men, that the military is a symbol of power in the society, and that women should have the possibility to be part of this power. Another argument again, used by the military itself, is to be found in UN resolution 1325 about Women, Peace and Security, arguing that augmenting the number of women in the military is part of implementing the resolution in Norway. There are two main reasons for this. One is that women bring other perspectives and values to the military and will represent a difference to the military itself. That will contribute to a “softening” of the military, and give it a more human image. The other argument is that more women in the military will give the military the possibility to reach out to women in countries in conflict and where NATO forces have a role. In order to promote this, Norway has engaged a woman as gender advisor at NATO’s headquarters. In this, respect the military tries to present itself as a peace organisation. The military's war-making and occupation are not communicated. One example of this discourse being used is Norway's participation in NATO’s occupation of Afghanistan. It was argued that this was partly for Afghanistan women and their rights. It was therefore important to recruit women to the Norwegian military in order to make it easier to reach out to the Afghanistan women. The military has a dual argument of women in the military: women are equal to men, and women are different from men. On the one side women can be “one of the boys”, and on the other side women bring in a different perspective, a feminine and caring side, which will “soften” the military and give it a more human face. In reality the first perspective is of dominance. After all, the women need to do the same training as men - hard physical training in order to be fit to meet the enemy, and it is male culture that governs. How can female caring values penetrate a patriarchal and military structure? A Norwegian researcher, Berit von der Lippe, has through several articles pointed at the military’s rhetoric. She points that the arguments of equality and women making a difference do not communicate the fact that it is about military operations abroad on behalf of UN, KFOR, NATO etc, and not about human security or a contribution to peace and conflict solving which is the military’s message.

What sort of feminism?

The arguments for conscription of women presented above are on the one side that women are "equal" men and on the other side they represent a difference. What is lacking in this discussion are values, and the aims of the military, and the question of what sort of values we would like to base our society on. Especially, it is strange that this is also lacking amongst the young socialist women aiming for a change in society. Them wanting to militarise women instead of demilitarising men is very hard to understand. I am wondering what has happened or what went wrong during the end of last century and the beginning of this one. Feminism to me, as we developed through the 1970’s and the 1980’s, means values of nonviolence: non-hierarchical and non-aggressiveness. It means that our goals should challenge the structure of obedience and subordination. Radical feminism was in accordance with the principles of nonviolence. We talked about liberation - not about being equal. Our struggle was about giving a higher status to social values and work linked to women, such as caring. So, what has happened during these 30 – 40 years? Why are radical women's values not valid any longer? It will take too much space to reflect around these questions, so I will reduce to mention a few elements which may be further explored:

Earlier feminism questioned society’s structure and made patriarchy and military functions visible. Feminists wanted to change these through nonviolence and experimenting with other ways of living. These fundamental questions have disappeared from what is understood by today’s feminism in Norway.