WRI: campaigning and networking in Colombia 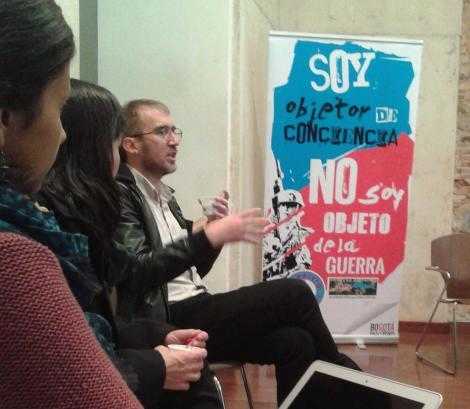 Colombia has endured almost 60 years of armed conflict, engaging left-wing guerillas, right-wing paramilitaries with government armed forces - heavily complicated by the narco-trade. We visited at a time when many commentators – from within and without Colombia – are talking about the move to a 'post-conflict scenario'. This mostly follows talks between the Colombia government and FARC (Fuerzas Armadas Revolucionarias de Colombia). Whilst of course many Colombians feel optimism and relief about this opportunity for change, FARC are far from being the only non-state armed actor in Colombia, and the Colombian military itself are hardly a trusted presence.[1] Meanwhile, conscientious objection – whilst provided for in the Colombia constitution[2] - is by no means a real option for conscripts 'on the ground'. Conscientious objectors have been subject to imprisonment for 'desertion', forcibly recruited during batidas (recruitment raids, like press gangs, often taking place on the streets or on buses), and face discrimination. This discrimination is often related to their lack of a libreta militar – the identity card handed to those who have completed their military service – without which, you are unable to graduate, or obtain many jobs. Being without this card also puts you at risk in batidas.

Since 2009, when Colombia's constitutional court ruled that there is a right to conscientious objection to military service under the Colombian constitution, Acción colectiva de objetores y objetoras de conciencia (ACOOC), our hosts in Bogotá, have been campaigning with others to see this ruling put into practice. Recently, a district-wide process in Bogotá has seen the Defensoria (Ombudsmen), UN High Commission for Human Rights, Bogotá Humana (the Bogotá Mayoral programme), ACOOC and others come together with the Ministry of Defence and armed forces representatives to found a Commission that will work to put this Constitutional Court ruling – along with a second Court ruling, which declared batidas unconstitutional – into practice. We attended the launch of the commission, and spoke on WRI's work in Colombia. In the meeting, we learned that brigades from different parts of the country often arrive in Bogotá to undertake a batida – and vice versa. The army recruitment office who was present caused frustration by leaving directly after making his intervention, leaving no time to engage in discussion, and by avoiding affirming the right to conscientious objection. Much of WRI's network refrain from working with the military, and it is clear that doing so will pose many challenges for those in Bogotá, though they argue that doing so will quicken a shift in policy on the ground for COs. Bogotá Humana (from the Mayor's office) want to declare Bogotá a batida-free zone. They also declared their willingness to employ those – including conscientious objectors – who do not have the 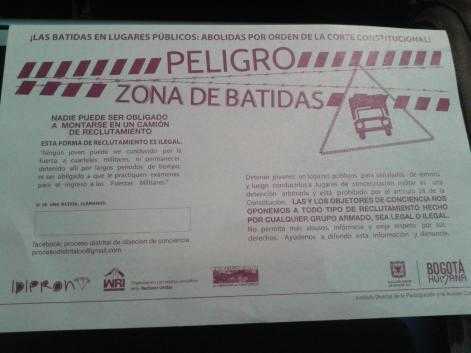 libreta militar, and to also put pressure on the universities in Bogotá to allow them to graduate. They are also providing space on their website – and on paper forms (see photo)– for batidas to be listed and denounced. Updated 10th December: Mayor Gustavo Petro, Bogotá's Mayor, has been banned from office. This leaves the role of the Bogotá local government into question somewhat.

ACOOC, along with JustaPaz, facilitated a public forum which explored the political and judicial tools that can be used to support COs. Rachel Brett's talk (download it here or see International Standards on Conscientious Objection to Military Service and Alternative Service applicable to Colombia, below) focused on the multiple international standards that Colombia is subject to in relation to conscientious objection. Following the 2009 constitutional court decision stating that conscientious objection is provided for in the constitution, a legal process has been ongoing, followed by ACOOC, proposing a law that would regulate for the right of conscientious objection. See video of ACOOC's Julián Ovalle explaining this process in the video (en castellano), and in the Proceso legislativo objecion de conciencia presentation below. I presented the Guía del Sistema Internacional de Derechos Humanos para Objetores de Conciencia (Spanish language version of A Conscientious Objector's Guide to the International Human Rights System) – an online tool that gives conscientious objector movements the information they need to access human rights mechanisms. We also heard about the mobilisation of 24th August – an important moment where groups across Colombia demonstrated in support of conscientious objection (watch video below). [video:http://www.youtube.com/watch?v=eOm7nalOASs width 400 lenght 300 | align=right autoplay:0] The panel at the end of the event ranged from a discussion of the militarisation of youth, the move towards 'remote warfare' (making war with smaller, more professional armies, often not 'on the ground' e.g. through drones), and whether lobbying for a law on conscientious objection that includes compulsory alternative service was the best antimilitarist strategy. The event was followed by a day-long workshop with conscientious objectors, their supporters and advocates, and young people considering conscientious objection in future – about thirty people 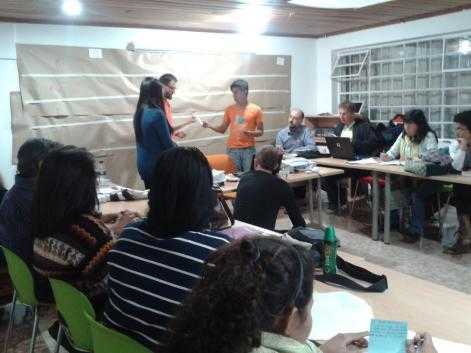 participated from across Colombia. We learned about the irregular and shocking cases of several conscientious objectors who have either faced forcible recruitment or were arbitrarily detained. Along with QUNO, we will accompany several of these COs to use international and regional human right systems to get their cases heard. It was good to see in the evaluation that participants all felt like having attended, they were more able to support COs, with more information on using international and national mechanisms, through the content input by WRI, QUNO and ACOOC.

Having waved Rachel off in Bogotá, Igor and I travelled to Bucaramanga for the Décimo Festival Nacional de la Juventud. Here, we faced some challenges about our commitment to nonviolence, but were amazed by the level of interest in conscientious objection as a stance, from individuals groups including ANDES (Asociacion nacional de estudiantes de secundaria). We also met with members of antimilitarist groups such as Labatorias por la Paz in Bogotá, and Quinto Mandimiento in Barrancabemeja. 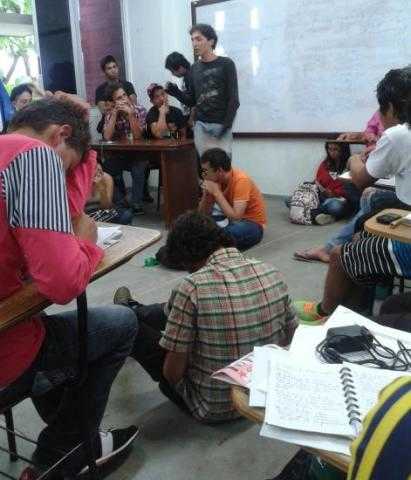 Some of those expressing an interest in conscientious objection were doing so because they are not interested in joining the state's army: not nonviolent activists, but with vocal or implicit respect for other armed forces, including left-wing paramilitaries. Although a rejection of the army should be welcome on the one hand, it will be a challenge for other COs to keep their voice heard, speak up for CO as an antimilitarist strategy, and to keep CO as part of a pacifist struggle in the eyes of the public. We distributed some copies of El Fusil Roto, and Objetoras de conciencia. Antología. In Medellin, we met with WRI's Colombian section – Red Juvenil de Medellin – who were planning their strategy for the next three years, including their feminist school. Their pursuit of feminist antimilitarism is a strength to WRI's network. Also active in Medellin are el Kolectivo Antimilitarista de Medellin, and in 'Future Plans' below you can read about ideas for action we developed with them. In Medellin, we also attended a meeting of a group of antimilitarists organisations who have started meeting together regularly, including a collective exploring alternative non-militaristic masculinities. Also see 'Future Plans'.

Our time in Colombia was also a good opportunity to make contacts in the media, and be interviewed for various broadcasters and newspapers, including El Tiempo and Prensa Rural. These contacts may well be of use in future years, in raising the profile of conscientious objection in Colombia. We also took the opportunity to meet with several groups working on conscientious objection and other issues of interest to WRI. These included Fellowship of Reconciliation USA, the Colombian Commission of Jurists (who work with ACOOC in the Coordinación Colombia Europa Estados Unidos) and staff from WRI's Catalan affiliate Centre Delàs currently based in Colombia. We also met with the Organización Nacional Indígena de Colombia (ONIC) - which will be helpful in future for understanding militarizations and indigenous communities in WRI - and attended a breakfast briefing with representatives of country embassies based in Bogotá.

There are three key – and interrelated - issues that WRI hopes to campaign with Colombia groups on. Here are some of those campaign ideas: 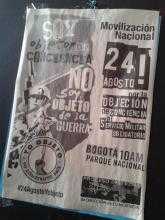 [1] One high profile reason for this is falsos positivos. Falsos positivos (false positives) are scenarios fabricated by the military, in which civilians or conscripts are captured or killed and it is claimed, inaccurately, that they are guerillas. Last year we reported on the village of Tacueyo, in which 25 people were killed in a falso positivo.