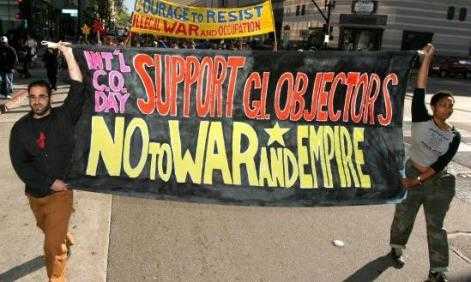 15th May was International Conscientious Objection Day, marked around the world as a day to celebrate those who have and those who continue to resist war, especially by refusing to be part of military structures.

Hundreds of people worldwide are imprisoned for rejecting conscription, or leaving the armed forces having developed a conscientious objection to war. In the Republic of Korea alone, there are more than 400 people incarcarated.

The majority of those imprisoned are men, but this is not only a male issue. As Cynthia Cockburn writes 'Militarisation is not just the existence of armies. It penetrates and deforms daily life in myriad ways. All of us are militarised, all of us can be conscientious objectors.' Women face conscription in Israel, Eritrea and Norway, and in many places are being targetted for armed forces work in order to boost the militaries' 'equality' agenda. Women activists in many countries worldwide are declaring their conscientious objection to militarism.

15th May has for many years been used as a chance for activists to promote conscientious objection as a form of nonviolent resistance, and tool to challenge militarism. We will show solidarity with those who are punished for doing so. One hundred years after the first world war started, 2014 is particularly being used in some countries to remember - and be inspired - by those who in that conflict declared that killing was wrong, and in many cases suffered for it.

Conscientious objector movements are taking action in Korea, Turkey, Belgium, Britain and the US. See events here, and write to hannah@wri-irg.org so your events can be added to that list.